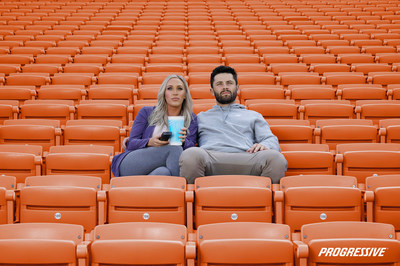 "From our first meeting with Baker months ago, we saw something special with him and set out to showcase his story, and our brand, in a different light. To that end, we tossed out the typical 'athlete-as-spokesperson' model and took a more modern, content-rich and episodic approach that's characteristic of today's network shows," said Jeff Charney, Progressive's Chief Marketing Officer. "There's no glorified pro-athlete persona or hard-sell messaging, just highly relatable, everyday (and quite funny) moments between Baker, Emily … and their rather unique 68,000-seat 'stadium home.'"

Quickly becoming a household name to sports fans across the country after breaking the single-season record for the most passing touchdowns by a rookie quarterback, Mayfield's connection to Progressive felt natural, beyond him being a real-life customer.

"I was drawn to Progressive because it's a high-energy, winning team. They thrive on accomplishing what's never been done before and what others say can't be done," said Mayfield. The Heisman Trophy-winning quarterback, who began his college football career as a walk-on at Texas Tech and repeated for a second walk-on at Oklahoma, hasn't followed a traditional path. "My life story and process have been different from others, so I felt right at home with Progressive because their journey has been a little different, as well. Emily and I both feel like it's okay to be unique, prove doubters wrong, and be proud of it. We think it'll be fun for people to tune in throughout the season to see how the whole story unfolds."

Progressive's season-long series doesn't follow the traditional model of making a group of ads and then releasing them in any order. This "season within a season," episodic content campaign will unfold gradually, as the Mayfields provide glimpses of funny and uniquely relatable "homeowners moments," like mowing the grass or fixing plumbing and electrical problems, as they settle into their new and unusual "stadium home."

"These interconnected, 30-second, bite-sized episodes will build throughout the football season. And while we're not going to give away any spoilers, we can say that we doubled-down on the authenticity of Baker's personality and the current life stage he and Emily are in," Charney said. "Having been in the spotlight for most of his life, Baker is a natural in front of the camera, and our unscripted, improv-based approach captured a side of him and Emily that has yet to be seen."

While each episode focuses on storytelling and character-building, the broader campaign highlights two key life moments that Baker and Emily have recently experienced: getting married and buying a home. Progressive understands life moments like these and offers a range of auto and home insurance options like HomeQuoteExplorer (HQX), which lets customers quickly compare and purchase homeowners insurance.

This first-ever "season within a season," episodic content series is the latest in Progressive's award-winning "network" of campaigns and characters. Others include the long-running Superstore campaign featuring Flo, the parent-leeching Baby Man and Rebel characters, the animated talking Box voiced by SNL alum Chris Parnell, the mythical half-man, half-motorcycle Motaur character, and the "we all become our parents" Parentamorphosis troupe.

The Progressive and Baker Mayfield family journey will officially "kick-off" on September 5, 2019, with the start of the NFL season and will run on both national television and digital channels.

About Progressive
The Progressive Group of Insurance Companies makes it easy to understand, buy and use auto insurance. Progressive offers choices so consumers can reach us whenever, wherever and however it's most convenient - online at progressive.com, by phone at 1-800-PROGRESSIVE, on a mobile device or in-person with a local agent.

Progressive is the third largest auto insurer in the country; a leading seller of motorcycle and commercial auto insurance and through ASI, one of the top 15 homeowners insurance carriers.

Founded in 1937, Progressive continues its long history of offering shopping tools and services that save customers time and money, like Name Your Price®, Snapshot® and HomeQuote Explorer®.